Why we are so emotion when come to investing?

Well, that's because "MONEY" is involved when making an investment. All of us has great emotional attachments toward money. Especially when you invest with your hard earned money. That's your blood and sweat hardcore money. Your emotions can influence your decisions in every steps of investing, from deciding what to buy, when to buy and when to sell. People make dumb decisions in investing due to their rational thought was clouded by irrational emotions. You need to be "emotionally intelligent" to mastered the "Game of Investing". 4 deadly emotions that you need to avoid when investing: Fear, Greed, Ego and Affection. 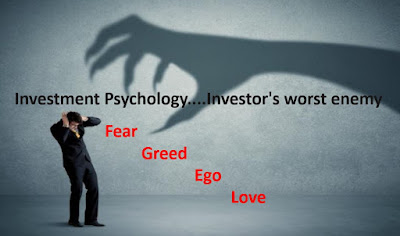 
"Buy low, Sell high" is the best investment advice that you ever heard on the street. But how many of us really doing that? Instead, most of us are doing just the opposite due to peer pressure. Welcome to the "herd mentality" exclusive club. Chasing the ever rising share into bubble and panic selling to exit the gate of hell. That is the "Psychology of Fear". When the wave of bad news hit the market, everyone started throw in the towels, what would you do? Would you start selling out of fear that you may lose even more, or would you start buying like Warren Buffet did during the 2008 financial crisis? In every market correction, the drop in share price usually started at slow rate. It will continue to accelerate. When the fear reached the pinnacle, that is when the peak of panic selling sank in, the price will dropped the most and usually followed by huge gap down at market open. This phenomenon also marked the end of correction phase if the stock managed to recover on the same or next day. When its happened, I would said that is the worst time to sell your stock. Hold on to your guts, be contrarian. You should start buying instead if you could overcome the fear factor. It is easier said than done when so much fears in the market. When all the analysts start cutting forecast about the economy, would you dare to overcome your fear and to be a contrarian? 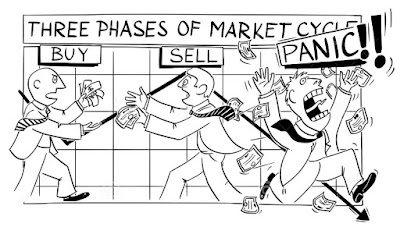 
Another herd mentality that could be deadly is Greed. If you talk to any technical analyst, they will tell you that a stock price that reached the peak and breakout will go much higher regardless company's valuations. That is because everyone follow the same trading patterns that create demands. Investors like to buy stock that has upward momentum because everyone is making money on the way up. . You are tempted to join the buying frenzy because you don't want to feel left out when your friends are making tons of money from stock market. That is FOMO - Fear of Missing Out. Sometime, the greed will push you to chase higher price, take bigger risk and worst, double down on your bet. That is how the stock's bubble created. You are getting bold to buy at much higher price due to Greed. By now, the stock's fundamental is detached from its lofty share price. Greed create ignorant. The tulip mania is a classic example that explained the greed of man. This is the world's first recorded speculative bubble in investment. This mania started in Holland where the contract price of tulip bulbs continued to rise astronomically throughout 1600s. By 1635, price for 40 tulip bulbs is 100,000 florins (1 florins=USD 13 in today's currency). As compared to a skilled laborer who earn 150–350 florins a year, price of 1 tulip equal to 10 years of his salary. Would you buy a tulip flower with your 10 years wages? That is madness and greed of man chasing the bubble. 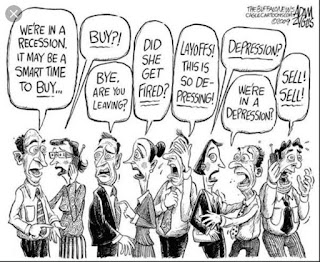 
There is ego in every one of us. We don't like to admit that we are wrong even though the mistake was obvious. That is so true in investing world and it can very deadly state of mind. Said you just bought a stock recently and the share price start to drop. Later, you realized that the company was reporting bad financial results, involved in legal dispute and the CEO just resigned!  Your Ego is preventing you from acknowledging the bad decision you have make and cut losses early. You doesn't want to take the losses as you still hoping for the situation to turn around. The share price continued to sink further, adding more damages to your pocket and confidence. What will be the  worst case scenario? That is when you decided to buy more to averaging down as the price keep failing. This is like trying to catch a failing knife, you could get hurt badly at the end. This is a common mistake make by most investors including myself. We could choose to sucked our thumb and acknowledge our mistake. Be truthful to our self, take action by taking losses early and move on. Remember, Ego doesn't do any good to your pocket.

Never fall in love with the stock just because you like their products or services. Have you ever bought a stock just because you like it's products or the name but later regretted? When you sense something is wrong with the company, don't buy regardless how much you really like the company or admire its products. I remembered many years back, Blackberry phone was very popular. There were many die-hard fans loving it. This stock ticker "RIMM", it was peaked at $150 a share in 2008. I first bought the share at $40, out of strong affection for their products. I thought it was bargain at $40 even thought the Apple was beating them with new iPhone launched every year. I finally muscle enough courage to sell the share at a loss for $30 a share and switched to Apple stock that year. Total damage was few thousands USD. Recently, I checked the stock RIMM is trading at $6 only. I make a grievous mistake by buying a stock out of affection for their products. You need to do a complete "thought through" process to understand the true value of the company and the right price before investing. I love drinking coffee at Starbuck but it doesn't mean I will invest in it if the price isn't right.


"Better to follow your mind than your heart", emotions can be disastrous to your investment strategies.

Personal notes:
Let me repeat it again. Your emotion can influence your decisions in every step of investing, from deciding what to buy, when to buy and when to sell. People make dumb decisions in investing due to their rational thought was blinded by irrational emotions. You need to be "emotionally intelligent" to master the game of investing. 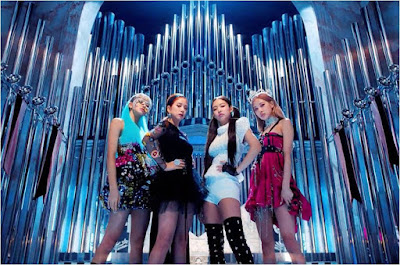 Other interesting investment articles to read; Click the link below:

Boom and Bust in 2019 revealed

Looking for opportunities during Market crisis

Discovering the first Pot of Gold.....

at January 09, 2020
Email ThisBlogThis!Share to TwitterShare to FacebookShare to Pinterest

Woke up one morning, I was shocked to read about the US killing Iran's top general on Iraq soil. Few days later, Iran started firing bal...

WILLIAM CHENG
My investment journey started when I make a small fortune from investing in Apple stock. I realized that a profitable investment require a good strategy. I started creating my own investment rules, stock picking methods and execution plans. In this blog, I would like to share my little investment thoughts and hopefully someone will benefit from my investment journey.